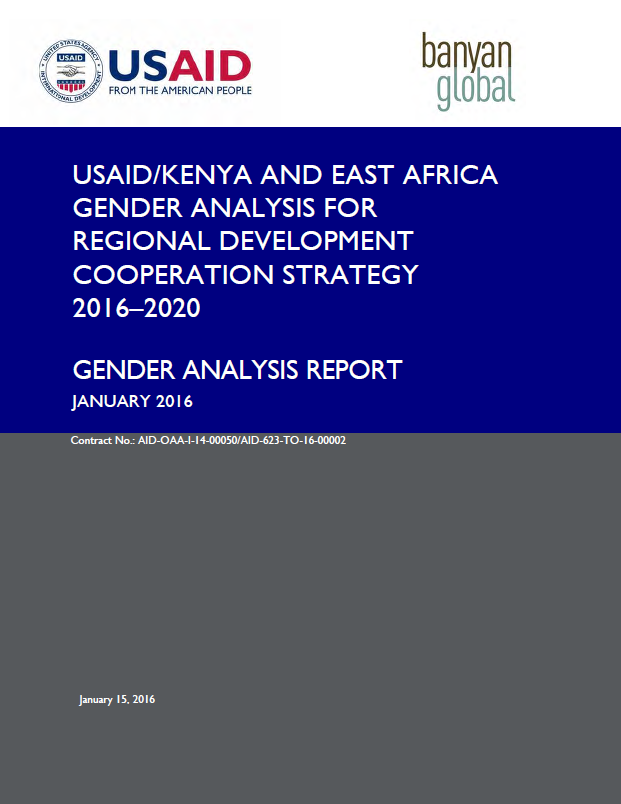 EXECUTIVE SUMMARY
This report, commissioned by USAID Kenya and East Africa, examines the gender dimensions of development within six key sectors across the region (13 countries) —Trade, Agriculture, Environment, Health, Conflict, Governance—as well as the ways in which gender is integrated into the work of regional intergovernmental bodies and development actors. The analysis is based on five domains of gender identified by USAID:
1. Access to and control over assets and resources (including income, employment)
2. Gender roles, responsibilities, and time use
3. Laws, policies, regulations, and institutional practices
4. Social norms and beliefs
5. Patterns of power and decision-making

Findings across these domains have been synthesized into General Findings and Sector Findings. Overall and sector-specific recommendations are then made to determine actions that can be taken to help close the identified gender gaps.
Overview of Findings
The analysis reveals that gender roles and norms, and the underlying imbalance of power that shapes them, create substantial differences in how men/boys and women/girls are able to engage in all sectors, limiting the opportunities, health and wellbeing for women and girls as well as their families and communities and hindering more robust development across the region. While some strides have been made in acknowledging gender as an issue, the gendered dimensions of development in all sectors remain largely overlooked or unaddressed in programming. USAID-funded programs are often designed and implemented without gender analyses or gender action plans. This results from a combination of factors including lack of genuine ownership of the issue, limited available technical expertise, limited resources, and shallow analysis.
Across the five domains of gender identified by USAID, the analysis found that:
Women’s access to and control over assets and resources (including income, employment) is limited in economic terms as well as in relation to controlling their own health and well-being. Women lack equal access to land and, therefore, capital (for which land can serve as collateral), as well as agricultural inputs. While the laws around land rights have begun to change in the region, they are not being translated into action. Men typically control financial resources; women do not have the same opportunities to work outside of the home or to make financial decisions. Women often have to ask for allowance or seek permission to spend. When they do earn income, they may forfeit their earnings to their partner or male relative. These patterns, in turn, limit women and girls’ access to essential services such as healthcare.
Gender roles, responsibilities, and time use are significant determinants of women and men’s access to and control over resources, economic empowerment, health, and safety. Women’s roles within the household mean that they do not have time for other forms of productive labor, and that most of their time and labor is unpaid (while girls are more likely to be pulled out of school than boys). Women who

earn income perform double or triple roles caring for the household and children while engaging in work such as farming or trade. Gender roles exacerbate conflict (e.g. cattle raids are used as a means of expressing “manhood”), heighten the risk of GBV (e.g. walking long distances to collect water and firewood), and adversely affect health-seeking behaviors of women and men.
East Africa has a number of laws, policies, regulations, and institutional practices to promote more gender equitable development, e.g. the EAC Gender Strategic Plan, the COMESA Gender Policy, and IGAD’s Regional Strategy for Higher Representation of Women in Decision Making Positions. However, policies are not being translated into practice and while important, have gone largely unimplemented.
Institutionally, gender integration remains a challenge because it tends to be donor-driven (ticking a box), and lacking in resources, technical expertise and analysis.

Cultural norms and beliefs across the region promote an imbalance of power between men and women and perpetuate rigid gender roles and responsibilities. This leads to unequal access and outcomes in each of the sectors covered in this report, as well as acceptability of multiple forms of GBV from domestic violence to border harassment to denial of opportunities.

The patterns of power and decision-making that underlie all of these gender domains create a critical gender divide. Men maintain power over women in both the private and public spheres, across different sectors. Even when women gain resources, they lack the power to decide how they are used. Women often have to seek permission to travel or to use household income, which negatively impacts their own health as well as that of their families. These power imbalances stifle women’s participation in government, environmental management (e.g. post-disaster reconstruction), formal and informal trade, health, agriculture, etc. and obstruct healthy development in the region.

Overview of Recommendations
This report recommends that USAID prioritize and invest in institutional strengthening around gender. This means recruiting and building technical expertise, allocating funds specifically for gender work, and ensuring that gender analyses are fundamental to programs. Programmatically, it is recommended to support community-led programming and engage both women and men in working towards gender equality. To integrate gender effectively and ethically, programs need to address the underlying power imbalances between men and women. Programs that do not do this, can end up causing more harm in order to meet their different needs in an ethical and safe manner.
Click here to read more…