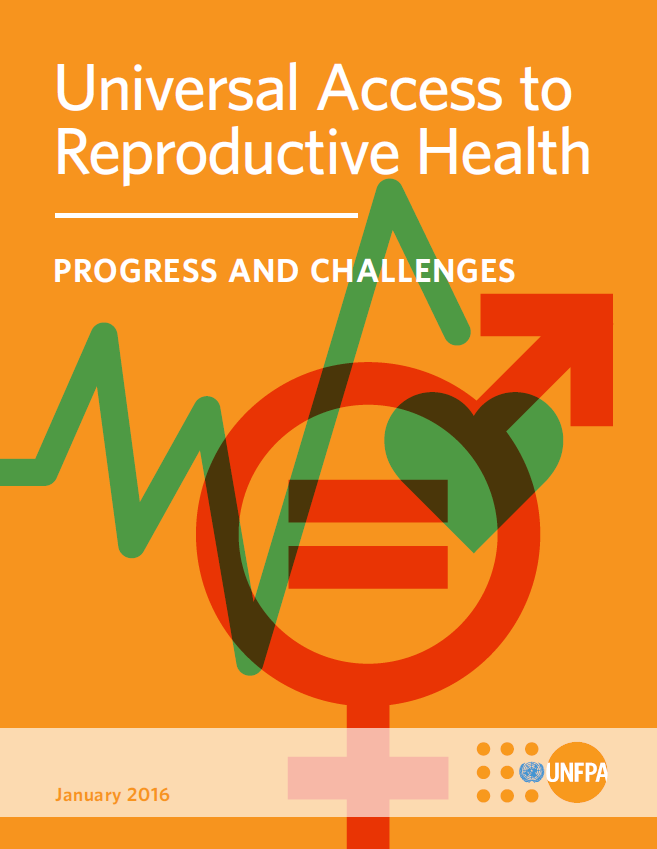 The importance of reproductive health and access to family planning in particular are now well recognized, to not only improve women’s chances of surviving pregnancy and childbirth, but also to contribute to related issues such as gender equality, better child health, an improved response to HIV, greater education outcomes and poverty reduction. This report profiles existing data around the main MDG5b indicators to identify progress achieved, and old and new challenges that could be addressed under the SDGs, particularly the nine targets under SDG3. The report highlights the most vulnerable and disadvantaged population groups, and their access to and use of reproductive health services.

In 2015, two out of three women of reproductive age who are married or in a union, use some form of contraception, either modern or traditional, and another 12 per cent have an unmet need for contraception. The most common methods, female sterilization and the IUD, account for more than 60 per cent of modern method use. One out of four users is using either pill or male condom.

Combining contraceptive use and unmet need shows that over eight out of ten women aged 15-49 who were married or in a union had their family planning demand satisfied, but with substantial variation across regions and countries. However, in Africa, less than half of women who are married or in a union who need contraception have their family planning demand satisfied.

While the MDGs are close to an end, through the SDGs, it is critical for the international community to reaffirm the promise of universal access to reproductive health and family planning, and increase investment in this area. Special attention needs to go to those regions and countries lagging behind and making little or slower progress.
Worldwide, some 1.2 billion adolescents, aged 10-19, comprise more than 16 per cent of the total population. An estimated 250 million adolescent girls live in developing countries, accounting for about one-sixth of all women of reproductive age. More than one in five of these adolescent girls are currently married or in a union, and 3 per cent are unmarried but sexually active. In 2015, 15.3 million adolescent girls will give birth, a figure rising to 19.2 million by 2035 if current patterns remain unchanged. Demand and use of contraception among adolescent girls have increased, but current levels are still remarkably lower than for other age groups. Expanding access to family planning services to adolescents will require political and financial commitments from governments and civil society to use existing evidence to develop policies and interventions that focus particularly on the most vulnerable groups of adolescents—those who live in rural areas, are out of school, have little or no education and/or reside in the poorest households. About 15 per cent of adolescent girls who are married or in a union are using modern contraception. Single methods seem to dominate, such as injectable in East and Southern Africa, the pill in the Arab States, and male condoms in Latin America and the Caribbean. In 2015, 12.7 million adolescent girls have an unmet need for family planning. This number will increase to 15.1 million by 2035 if current trends continue.

Births rates among adolescents and contraceptive dynamics are significantly affected by place of residence, level of education and household wealth. Adolescent fertility rates are considerably higher in rural areas, among those without or with low levels of education, and in the poorest households.

There are many determinants of contraceptive use in developing countries, including access and availability to modern methods. For Ethiopia and Nigeria, a comparison of survey results contrasted changes in contraceptive use with method availability at service delivery points (SDPs). This revealed a possible contradiction between the high availability of modern methods in all SDPs, and Nigeria’s low levels of CPR, and Ethiopia’s high concentration on injections. In trying to understand these differences, this paper documented the main reasons for not using contraception among women with an unmet need as well as levels of informed choice. Important percentages of women with an unmet need in both countries were in the postpartum period and/or breastfeeding, while fertility-related reasons were of greater relevance among younger mothers. Since postpartum or breastfeeding periods carry the potential for pregnancy, counselling needs to target women in this group.

Guaranteeing informed choice to current and future users of contraception fulfils basic reproductive rights and indicates quality of care. In the long run, it
contributors to the relevance, effectiveness, efficiency and sustainability of family planning programmes.