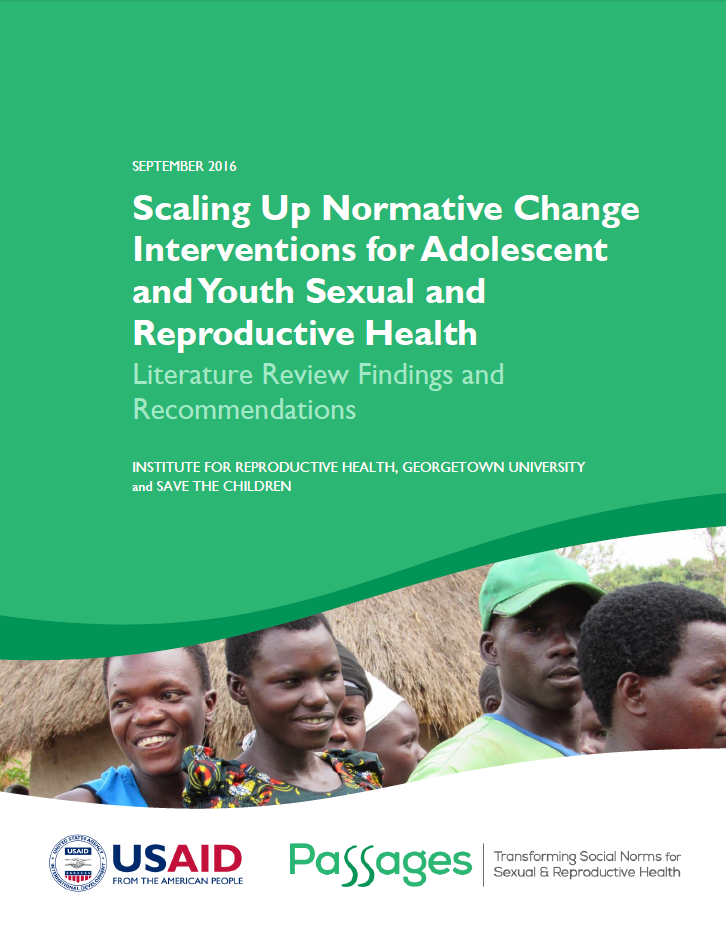 EXECUTIVE SUMMARY
The Passages Project conducted a literature review of published grey and peer-reviewed literature to explore parameters of normative change interventions going to scale that were focused on adolescent and youth sexual and reproductive health. Forty-two (42) of 303 identified projects were eventually included in the review because they were going to scale and indicated an important focus on influencing community norms to achieve individual behavioral outcomes. Most projects were community based (35 of 42, or 83%) and employed social mobilization/community mobilization approaches, were designed to reach girls as well as boys, and were scaled up after evaluation of a pilot phase (39 of 42). Over half the reviewed projects (23 of 42, or 54%) employed evaluation designs that included comparison groups. Most assessed changes in knowledge (37), attitudes (39), and behaviors (41); relatively few assessed individual agency (14) and even fewer (12) assessed changes in perceptions of community norms, that is, perceptions of others’ behaviors and social expectations for their own behavior. Of these 12, only four (4) were explicit about what norms were being measured.

Most documentation was related to pilot efforts – only 13 focused on scale-up and seven of the 13 discussed institutionalization efforts (versus expansion). Almost three-quarters (30 of 42) of reviewed projects were scaled up by the same organization engaged in the pilot effort. Even though by definition the projects were in scale-up phase or operating at scale – the documents reviewed did not describe well the process of scaling up, how pilots were adjusted for new scale-up environments, indicators used to track scale-up activities, or methods to ensure intervention fidelity at scale. Still, the review highlighted several factors that projects cited as important during scale-up or during both pilot and scale-up phases.

 Effective strategies revolved around community-centered SBCC approaches and their potential for starting and sustaining normative shifts. Authors noted the importance of public discussion to create the critical mass needed to achieve sustained social change and the importance of community-driven collective action to diffuse new ideas within the community. Interventions were designed to be relevant and interesting, thereby engaging communities in the SBCC effort. They linked community actions to policies and programs to legitimize community-driven efforts.

 Attention must be paid to scale up implementation supports. In particular, interventions need to strategically engage influential community and government stakeholders, and to develop tools and guidelines for new users of the interventions.

 Staff must have mindsets and skill sets reflective of normative change. Periodic reflection is critical to create personal clarity on how norms affect staff as well as communities they serve, and to encourage agility and capacity to manage scale-up processes in changing environments without compromising intervention fidelity.