Living Free and Equal – What States Are Doing to Tackle Violence and Discrimination against Lesbian Gay, Bisexual, Transgender and Intersex People 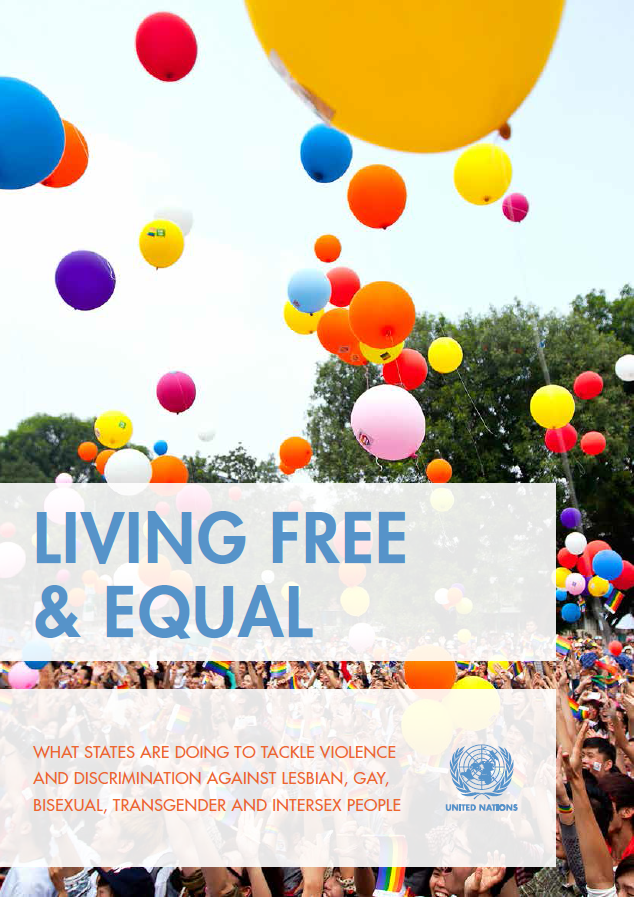 In recent years, awareness has grown of the scope and scale of violence and discrimination directed at lesbian, gay, bi, trans (LGBT) and intersex people around the world – including killings, torture, arbitrary detention and widespread discrimination in access to health care, education, employment and housing.

United Nations, regional and national human rights bodies have identified critical gaps in the implementation of international standards to address these and related violations, and have issued a plethora of recommendations, including, among them, the repeal of discriminatory legislation and measures to protect LGBT and intersex people from discrimination, violence, torture and ill treatment, and safeguard rights to freedom of expression, association and peaceful assembly.

Increasingly, Governments are taking action – whether in the form of legislation and policy measures or through targeted social and education programmes. At the United Nations Human Rights Council, more than one hundred countries from all regions around the world have voluntarily committed to take measures to end violence and discrimination linked to sexual orientation and gender identity, based on recommendations generated during the first two cycles of the Universal Periodic  Review.

Even so, there has been relatively little analysis at the international level of the practical steps that States have taken or are taking to implement United Nations recommendations in this field. In my report to the Human Rights Council in June 2015, I provided a brief overview of some notable positive developments in recent years,  incorporating  information received from States. It is clear that there is demand, to which this publication responds, for a more in-depth analysis of existing  concrete  practices,  and  of  the  remaining  gaps  and  challenges.

The results of this study provide grounds for hope – showing us the myriad of ways that national and municipal authorities, courts, parliaments, and national and regional human rights institutions are meeting their responsibilities to address this critical human rights issue.

However, serious challenges remain. While many countries have taken encouraging steps, in most cases, these efforts have fallen short of the concerted strategy required to tackle violence and discrimination against LGBT and intersex people. Even in countries that have arguably recorded the most progress in respect of the rights of gay men and lesbians, there has been far less attention given to protecting the rights of trans people and only incipient attention to the rights of intersex people.

Our analysis also highlights the need for more data on the human rights situation of LGBT and intersex people, and for the systematic evaluation of the effectiveness of measures by States to address the abuses that they face.

I am confident that this publication will spark discussion and hope it will inspire renewed efforts and determination by States, national human rights institutions, civil society organizations, regional organizations and members of the United Nations family to join forces to end human rights violations on the basis of sexual orientation, gender identity and expression, and sex characteristics.